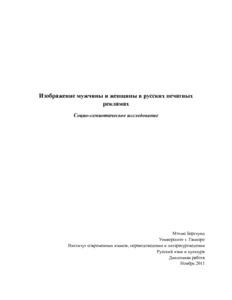 Advertising is a ubiquitous and unavoidable part of contemporary life in many societies. Since it is a powerful cultural institution which operates on the appropriation of cultural values for the sake of increasing revenue for the proprietors of goods and services, advertising warrants investigation as a sophisticated and deliberately persuasive form of semiosis. No less interesting is the creation and reformulation of ideas about gender within advertising, especially in transitional societies such as Russia, where the collapse of the Soviet Union has resulted in a divergence of ideologies and value systems.

This study aims to look at the ways in which Russian print advertisements for household technologies published between the years 2007 and 2010 use various visual elements to create ideas about men and women within and around the household. Of particular interest are the identification of those visual elements which are used most frequently, how they are structured and what the effect of their use and structuring is.

The theoretical basis of this study is the social semiotic theory of visual representation, which holds that semiosis is inherently a motivated act involving the transformation of historically developed conventions of communication constrained both by context and the availability of semiotic resources (in this case, visual resources). Furthermore, social semiotics considers power to be of utmost importance in the semiotic process.

The material for this study has been analyzed using Kress & Van Leeuwen’s Visual Grammar, a social semiotic account of visual elements as they have come to be used in communication in most Western cultures. The analysis has been approached from the Cultural Studies point of view, and interpretations of the gender representations have been made against the backdrop of the contemporary gender order and gender contracts in Russia.

The advertisements that have been analyzed create a strong contrast between the power of men and the power of women within specific realms of the household. The subtle and non-subtle use of camera angles and distance creates a world that reflects the changing gender situation of contemporary Russia, but also limits the viewer’s interpretation of these changes by visually structuring more traditional power relations.