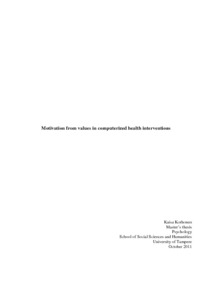 There  is  an  urgent  need  for  cost-effectiveness  in  health  care.  Computerized  health  interventions offer a way of reaching large numbers of people, whilst requiring moderate resources. However, if no  human contact  can be provided within the  intervention,  users’  motivation for  health behaviour change  might  be  limited.  The  effects  of  personal  values  as  a  means  to  motivate  users  were researched. It was assumed that integrating a highly personal component to the intervention would make computerized health interventions feel more meaningful and relevant.

The main part of this thesis consists of a literary review of the articles discussing the relation of personal values to  motivation.  After a  primary overview, two theoretical approaches were chosen for  further  examination:  self-determination  theory  (SDT)  and  Acceptance  and  Commitment Therapy (ACT).

According to  SDT,  both the quantity and  the  quality of motivation are  important.  For optimal motivation,  humans  must  feel  autonomy,  mastery,  and  connectedness.  Supporting  these  basic psychological  needs  can  help  to  integrate  the  values  related  to  certain  behaviour,  thus  making  it more  self-determined.  The  SDT  approach  could  provide  basis  for  increasing  motivation  without conscious values-work (e.g. through a rationale for healthy behaviour, based on personal values).

ACT  views  valued  behaviour  as  the  ultimate  goal  of  any  intervention.  It  focuses  on  the intrinsically  reinforcing  nature  of  valued  behaviour.  Thus,  linking  personal  values  to  healthy behaviour could increase motivation for the latter. Preliminary evidence from analogous framing of values and coping with pain supports this rationale. Additionally, focusing on valued behaviour has been  shown  to  increase  well-being.  However,  in  ACT  values  are  contextually  defined,  and  thus need  to  be  clarified  in  detail;  the  ACT  approach  could  provide  basis  for  increasing  motivation through deliberate considerations of personally meaningful values and behaviour.

To  further  examine  the  feasibility  of  supporting  motivation  through  personal  values  in computerized  health  interventions,  a  pilot  study  was  conducted.  Respondents  (n  =  69)  were presented with messages aimed at increasing motivation for physical exercise. Two of the messages were  based on factual information,  one on the general idea of a good life, and eight  on the  main motivational dimensions from Schwartz value theory. Respondents were asked to rate the messages on their  motivational quality. The Short Schwartz Value Survey was used to determine the values orientation of the respondents. Descriptive analyses were then performed on the data. It was found that  most  of the  respondents  found  some  of the  values-based  messages  more  motivating  that  the messages  based  on  fact  alone.  However,  importantly,  most  of the  respondents  rated  some  of the values-based  messages  less  motivating  than  the  fact  messages;  indicating  the  need  for  personally meaningful  communication.  A  majority  of  the  respondents  also  rated  some  of  the  values-based messages  more  motivating  than  the  general  idea  of good  life,  indicating  that  personalization  and precision  are  important.  Generally,  values-based  messages  were  rated  higher  by  those  with congruent  personal values than  by those  with conflicting  values.  However,  on an  individual level, values-orientation alone was not enough to predict which messages the respondents rated highest.

Based on the literature, it appears that values could help to make health interventions personally meaningful.  Both active values work and tailoring on values appear  feasible. However,  for  future considerations it  would  be  important to  further determine the necessary level of detail for values-based communication.

This thesis was written at the VTT Technical Research Centre of Finland, during the period from April 2010 to May 2011. The study was supported by the SalWe Research Program for Mind and Body (Tekes – the Finnish Funding Agency for Technology and Innovation grant 1104/10).