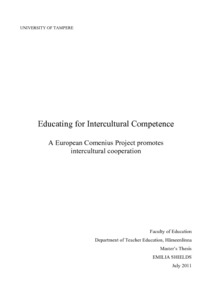 In this research topics of intercultural development are examined through a phenomenographical case study. The study centres around a Comenius Multilateral School Partnership Project, which aims to improve cooperation and intercultural learning between European schools. As part of the initiative to promote intercultural learning of children in the countries of the European Union, the European Commission launched a Comenius Project in 2009-2011 linking schools in Austria, England, Finland and Germany. The partnership of these countries actualised on multilateral and bilateral level. This study provides an analysis of the practises and learning outcomes from the Finnish perspective through a school partnership between a fifth grade class in Finland and a seventh grade class in Austria.

The main focus of the study is the experiences and learning outcomes of the 22 Finnish pupils, that were participants in the Project. Research data is comprised of interviews of pupils, their parents and class teacher, pupil surveys, written narratives and observation of the researcher. Practical aspects of implementing the multi-faceted intercultural learning situations, which culminated to a 7-day study visit as the Austrian pupils visited Finland and were hosted in homes, are addressed. Key themes of the study involve various aspects of intercultural learning, such as development of intercultural sensitivity, role of national identity, situated learning, language acquisition and curricular frameworks. These themes are approached from theoretical as well as practical viewpoints and aim to build a holistic understanding of intercultural learning in practice.

The theoretical basis to intercultural matters discusses the current need for intercultural competence, a challenge posed by globalisation and its various representations. In short, the demand for international cooperation and intercultual skills has increased while the notion of global citizenship has gained ground. The postmodern concept of globalisation is covered in this study through argumentation by scholars such as Anthony Giddens and Zygmunt Bauman. An inseparable element of intercultural development, national identity is discussed based on theories of Stuart Hall. At the core of the theoretical framework, Milton Bennett’s Developmental Model of Intercultural Sensitivity outlines the fundamental components of intercultural development setting the standard for analysis of research findings.

The most significant learning outcomes from pupils’ viewpoint are increased competence and courage to speak a foreign language as part of developed intercultural skills, and motivation to become acquainted with foreign cultures and people. Pupils also shifted in their thinking to a more accepting attitude towards cultural difference while learning to appreciate and embrace the uniqueness of their own culture. Eagerness to claim every culture as equal increased as well as understanding of global issues. Other findings suggest that teaching intercultural topics may be integrated into the objectives of the National Curriculum, although readiness to integrate and implement these topics require intercultural awareness and competence from teachers. Overall, participation in the Comenius Project was regarded a positive experience and a privilege by nearly all participants, which indicates a progressive development to the direction where the countries of European Union are encouraged.