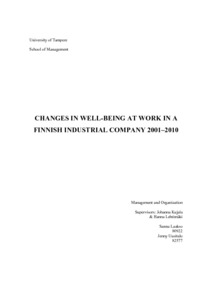 The purpose of this study is to describe the development of well-being at work between 2001 and 2010 in a case-setting. The purpose is reached by means of a literature review on changes in Finnish working life, a theoretical framework and the empirical data. Changes in the Finnish working life are studied as a context of the study, helping the reader to understand the main changes that have taken place in the past two decades. The theoretical framework of the context of well-being at work is constructed through concept analysis, concentrating on previous literature in the field. In the empirical part, the well-being in a case company is studied through survey data and annual reports of the company. The entire organisation is studied as well as an individual department in it. The empirical data is analysed using several methods such as descriptive statistics and content analysis. The well-being at work survey applied in the case company is also studied in more detail, reflecting the content to the framework of well-being at work that has been constructed. This analysis is conducted to study what aspects of well-being at work the items of the questionnaire relate to and to suggest how the questionnaire could be developed.

Well-being in the case company reflects the changes that have occurred in Finnish working life. For example, at the same time as the employees in general expect more possibilities to influence matters that concern them in the workplace, the survey results show that opportunities to participate have declined. Several mean values in the survey have declined towards the end of the period of review, which may be due to the changing employee expectations and changes that have taken place both inside and outside of the organisation in this period. A special finding is that the mean values of the items measuring managerial work developed to the opposite direction compared to the other sets of items of the questionnaire.