Essays on Corruption and Economic Growth: A Theoretical and Empirical Evidence 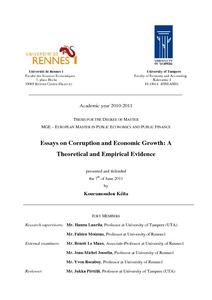 The goal of this Master's Thesis is to explain the determinants and implications of corruption phenomenon. With this intention, initially, it reviews the literature on corruption. Then it develops an empirical study which tries to test three theoretical assumptions which are: the impact of corruption on economic growth; the contribution of corruption’s transmission channels; the effect of corruption on the composition of government expenditures. Panel data, relative to twenty-three OECD countries, then to thirty-five ones, with random and GLS estimators are used. In addition, for a question of reliability and robustness of the results, cross-country regressions are also implemented.

At the conclusion of the various tests, it is clearly highlighted that the empirical results perfectly corroborate the theories. Thus, it appears that corruption reduces economic growth. This influence is made possible thanks to certain determinant variables. In addition, corruption has also an impact on the composition and the level of public expenditures.