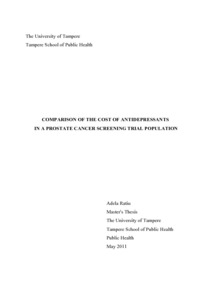 The aim of this study is to compare, in terms of the costs recorded in a comprehensive national register, the use of antidepressant drugs in both the control and screening arms of the Finnish trial.

A number of 76,223 reimbursement records for antidepressant drugs corresponding to 5,858 men in the control arm and 3,912 men in the screening arm were analysed for the period under study from 1996 to 2004.

Our study showed little impact of the screening trial, of participation in the screening or of the concentration of prostate-specific antigen on the expenditure on antidepressant drugs. Further studies, based on supplementary information (i.e. quantity of antidepressant medicine) could contribute to a better assessment of the prostate cancer screening impact on mental health.