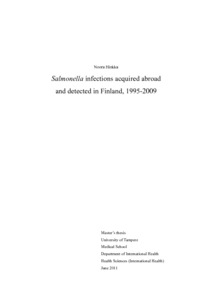 This register-based study aims to find out the trends of Salmonella infections that are most likely contracted from abroad, but detected in Finland during 1995-2009, and to examine how these trends are correlated with the number of Finnish travellers to these destinations. All the registered 30,977 Salmonella cases of foreign origin during 1995-2009 were received from the National Infectious Diseases Register. Passenger information was extracted from the public data of Statistics Finland. The analyses targeted countries that had been at least once among the ten most frequently reported source countries for salmonellosis during the follow-up period.

The vast majority of the Salmonella infections was detected among Finnish citizens (95.0%). More female (54.4%) than male cases were reported (p <.001). The mean age of the persons with registered salmonellosis of foreign origin (37.7 yrs) was not essentially changed during the study period, but, instead, reports on children (<20 yrs) with Salmonella infection increased at the end of the study.

Thailand, Spain and Turkey were the most frequently reported source countries. The overall risk of travel-related salmonellosis was 31.8 / 100,000 Finnish travellers per year (including one-day cruises). The highest risk countries were Thailand (679.8/100,000 travellers to the country), Tunisia (517.0), and India (415.1). In general, the trends of incidences seemed to decline in almost every studied country since year 2000. However, Thailand was the only country that increased the number of Finnish passengers but had a steady or even increasing incidence trend of salmonellosis among the Finnish travellers.

S. enteritidis (43.5%) was unambiguously the most frequently detected serotype in Finland, followed by S. typhimurium (7.8%), S. virchow (4.2%), and S. stanley (3.7%). The majority of some serotypes was almost solely connected with travellers to a single country: S. stanley to Thailand and S. bareilly to India.