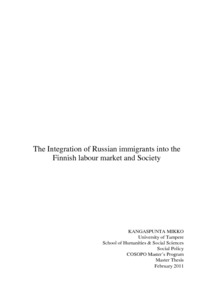 The method of the study is instrumental case study. The Russian minority is used as a case instrument to investigate the behaviour of Finnish labour market and society. The case group is 11 Russian immigrants. Data of the research is collected by using qualitative, theme interviews. The written interviews were the best qualitative way to describe the individual experience of migration and integration; how respondents find their options, possibilities and difficulties when trying to find a job and their place in Finnish society. When analysing the interviews, I will use Narrative Theme Analysis since the questionnaire is build on themes and the data collected is narrative. In addition to collected data, I will use secondary data and descriptive statistics.

The first priority of the research is to describe the overall view of the integration of the Russian immigrants to the Finnish labour market and to the society. The second priority is to describe the experienced discrimination in that process. In addition, research describes subjective perception of Russian immigrants in being part of the Finnish society.

As a result of the investigation, I found out that the discrimination exist more strongly in the labour market than in society. The case group has experienced difficulties in the application process when seeking employment. At the end of the research, I will discuss the possible solutions for the future problems of labour migration and integration of foreigners in Finland.