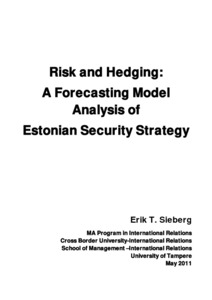 Post-Soviet Estonian security management behavior is used as a case study to differentiate and conceptualize "hedging" as a distinct and integral security risk reduction behavior in International Relations. A forecasting model developed by Bruce Bueno de Mesquita is utilized to structure and analyze the interactions of all stakeholders involved in contentious negotiations over an issue. The research utilizes the model to substantiate and confirm the concept of "hedging" through the modeled spatial and Bayesian output manifestations of stakeholder security-related interactions. The same process to substantiate "hedging" as a distinct security-enhancing behavior also highlights benefits and risks of "hedges". The extended research consists of a comparative three hypothetical Scenario framework and a security related issue (the April 2007 Bronze Soldier incident) which identifies spatial attributes, characteristics and overall systemic impact associated with Estonian security "hedging" behavior through membership in NATO and the EU. Such NATO and EU institutional linkages to Estonia are assumed to increase salience of fellow members to Estonian security-related issues such as the Bronze Soldier dispute with the Russian Federation. The analysis finds that NATO and EU membership for Estonia provided efficacious security enhancement in the dispute. Further determinations are made about Estonian "hedging" costs relative to the uncertainty of future benefits of either or both NATO and EU institutional "hedges". Additionally, the research gives a picture of regional stakeholder relations and determines that NATO and EU institutional expansion in the Estonian case contributes to European regional security and systemic stability.