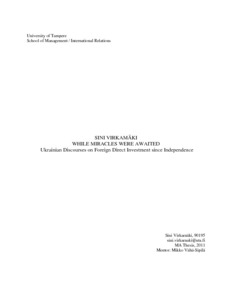 Thus far, policies on foreign direct investment (FDI) have no institutionalized agreement or organization on an international level. This situation can be challenging for governments, as balancing interests of transnational corporations (TNCs) with political strategies may prove difficult—particularly if being a newly independent state such as Ukraine in 1991. Even though FDI was promoted and legislation passed accordingly, Ukraine with its perceived potential has been viewed upon as a disappointment in this field; however, most research has been done in quantitative manner. This thesis aims to contribute to the diversification of research on FDI through using Critical Discourse Analysis to study the articulations of Ukrainian political elites and changes in their perceptions on FDI, Ukraine, the state, business and the world economy; after which they are paralleled to the perceptions of four international organizations (IOs). How these relate to larger structures and what alterative visions of FDI there may be is then analyzed through a neo-Gramscian perspective. In contrast to the IOs, Ukraine has presented alternative ideas of the roles of actors involved along with an emphasis on social characteristics of FDI, such as integration and cooperation. What this entails is then discussed with regards to issues of inclusion, competition, and the non-existence of international policies on FDI.