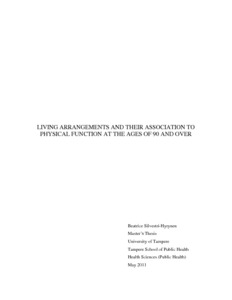 Gains in longevity and improvements in health such as resulting effects on demographics are the subject of both research and everyday conversation. The purpose of this study is to extend these studies by evaluating relationships between living arrangements and physical function, one main aspect of health, among the oldest old populations. Another major goal is to investigate the impacts of these factors on gender. The intention is to throw more light on this area of study to better understand how the oldest old live, their physical function, and how these correlate with gender.

This research draws from the Vitality 90+ study, a cross sectional data based on postal questionnaires conducted in Tampere, Finland in 2007. The survey, focusing on nonagenarians, has been undertaken several times between 1996 and 2010.

The statistical analysis includes a descriptive component and a modelling part where binary logistic regression was applied to test association of the variables representing living arrangements and function by gender.

Outcomes reveal that one out of five study participants were male. Proportionately, men are more likely to live in the community. Further, women living at home are very likely to live alone. Overall, living alone is the most common arrangement but a considerable number of men also live with a spouse. Women show throughout all physical function tasks a higher dependence. Finally, logistic regression showed no gender difference of living arrangements in association with physical function and chronological age.

In conclusion it can be suggested that vulnerable men die but the survivors no longer differ from women in terms of physical function and age above ninety linked with living arrangements. However, apart from keeping older populations in general mobile for a long independent life, resources could, wherever possible, concentrate on the oldest old women because firstly there are comparatively more, secondly they tend to become frail more easily, and thirdly most of them live alone.