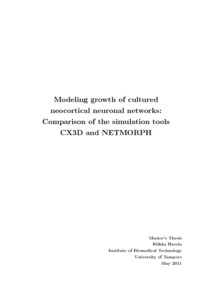 Background and aims: Development of neuronal morphology and formation of networks is an elaborate process determining the information processing capabilities of the formed network. The early phases of this process are readily studied in vitro, but are so far incompletely understood. Computational modeling can help in revealing the mechanisms of development of neuronal networks. The aim of this work was to compare two recently published simulators of neuronal growth, CX3D and NETMORPH, by implementing in them a model of growth of neurons in culture.Methods: Three different models were built and simulated with parameter values determined based on the literature. The ?rst model has 100 interconnected neurons and was simulated on both CX3D and NETMORPH varying the neurite growth rate parameters. The second model has 1000 neurons and was simulated with NETMORPH. The third model has 100 neurons and was simulated with CX3D varying the attraction parameter. Sholl analysis was used to analyze the produced single neuron morphologies, and graph theoretical measures (in-degree, shortest path length,motifs) were used to quantify features of the simulated neuronal networks.Results: Based on the quanti?cation of numbers of synapses, CX3D simulations produced neuronal networks closest to the experimentally observed ones, but Sholl analysis revealed in some cases unrealistic features in morphologies of neurites. Also, the simulations were computationally heavy. NETMORPH also produced realistic results, but with excessive numbers of synapses per neuron. The simulations, however, were lighter. Proportional to the number of synapses, the graph theoretical measures behaved similarly with both simulation tools.Conclusions: Implementing the same model in both CX3D and NETMORPH is not straightforward. Thus, they also produced differing results with the same set of simulated parameters. However, with a correct choice of parameters, both simulation tools are capable of producing qualitatively similar results. Both tools produce results that are in the range of experimentally observed values. The different nature of the tools suggest different applications. CX3D would be suited for models that have molecular guidance cue diffusion, and NETMORPH for graph theoretical studies of large neuronal networks.