BMP7 as a modulator of breast cancer growth and migration 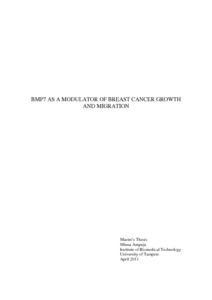 Background and aims: Breast cancer is the most common cancer in women in Western countries and a global health concern affecting millions of people. Thus the search for causative agents and possible curatives continues to be important. Bone morphogenetic proteins (BMPs) are a group of growth factors that have been implicated in various cancers, including breast cancer. They were originally discovered due to their ability to induce bone formation, but are now recognized as multifunctional developmental regulators of cell proliferation, differentiation, apoptosis and motility. Dysregulation of BMP signaling pathways has been shown to contribute to cancer progression. The aim of this study was to examine the effect of BMP7 on breast cancer cells through proliferation, migration and invasion studies in five breast cancer cell lines.

Results: BMP7 treatment resulted in cell line-specific phenotypes. BMP7 decreased the growth of MDA-MB-361 and HCC1954 cells (on average 9% and 19%, respectively), increased the growth of MDA-MB-231 cells (128%) and had no effect on the two remaining cell lines. However, no differences in cell cycle were detected between BMP7- and vehicle-treated MDA-MB-361 and HCC1954 cells. BMP7 moderately increased migration in MDA-MB-361, SK-BR-3 and BT-474 (from 1.1-fold to 1.6-fold). A more dramatic increase (7.4-fold) was seen in MDA-MB-231 cells. Furthermore, invasion of BT-474 cells was examined but no changes were detected between BMP7- and vehicle-treated cells. Western blot showed that the canonical BMP signaling pathway through SMAD proteins was activated in MDA-MB-231, BT-474 and MDA-MB-361 cells, whereas in HCC1954 and SK-BR-3 cells the MAPK pathway was induced.

Conclusions: BMP7 has diverse effects on the growth of breast cancer cells. BMP7 induces both proliferative and anti-proliferative effects, as well as having no influence on cell growth. Moderate increases are seen in migration upon BMP7 stimulation. In conclusion, BMP7 has an important and complex role in breast cancer, and its effects are dependent on cellular background.