The Future of the Retail Advertising: Implications for the Finnish Newspaper Industry 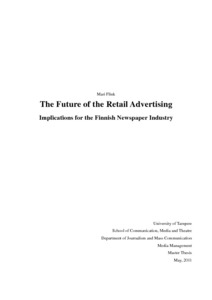 Starting point for this research was the future changes Internet will cause to Finnish newspaper economies. When evaluating the economic importance of future development to newspapers? economies, one of the most important areas is retail advertising and its shifting to online environment. So far Finnish retail advertising has been very much focused on printed newspapers and retailers? online investments have been moderate and conservative. The change is about to happen and this research answers the question of what the future of online retail advertising looks like.

This thesis represents abductive orientation of qualitative research and it has been realized by interviews and focus group methods. The results are based on empirical data collected from twelve managers during 2009-2010 from Sanoma, Kaleva, Aamulehti, Iltalehti, Schibsted Finland, Kesko, SOK and The Finnish Association of Marketing Communication Agencies. Results were analyzed using content analysis, theory of paradigm change in retail advertising and scenario method. During the research process, a theoretical framework of paradigm change from intrusive to exclusive advertising was developed to be used for analyzing the empirical findings. The theoretical framework is based on four different theories: media dual market model, paradigm change theory, mass customization and search theory.

The qualitative research, content analysis and theory formation indicate that Finnish retail advertising is facing significant changes in the future that have impact on newspaper economies. The old dual market model of subscribers and advertisers was based on two products, newspaper and mass audience. The new paradigm of exclusive advertising requires several products: newspaper, mass audience and customized sub audiences. In the future, newspapers operate in two stages: first they amass the audience and next they break it to pieces with online analytics.

This research produced a scenario of exclusive advertising, where newspapers offer ever more customized online advertising solutions to retailers. In order to manage that, newspapers need strong development of online analytics to collect deep data of readers, to be processed for advertisers. Newspapers could also consider developing their consultative role towards retailers? marketing departments. The results of this research support more a sudden change than evolutionary development, and it seems that time for action with retail advertising is at hand.