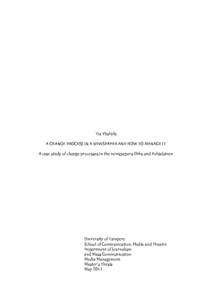 The aim of this Master's Thesis is to investigate how change should be managed in Finnish newspapers. The subject will be approached through a case study. In this study, I will examine how two regional Finnish newspapers, Ilkka and Pohjalainen, executed their large-scale change project in 2010.

The objective of this thesis is to create a useful model that can help newspaper companies to execute large-scale change projects with the greatest possibility of success, as well as to understand what went well in the change project of Ilkka and Pohjalainen and what would need to be improved. The objective is not to prescribe what newspapers should do in order to survive the current crisis, but rather to determine how to execute changes with the best possible results.

In the analysis, I will concentrate on the manner in which Ilkka and Pohjalainen implemented these large changes in practice, and then compare it with the theoretical model of change management in newsroom. I will also examine what they and other Finnish newspaper companies can learn from this project.

The theoretical framework of this study is based on the work of several highly esteemed change management researchers. The macro level theory consists of a model called Unfreeze, Change, Refreeze that was developed by Kurt Lewin. The micro level theory, for its part, consists of several change management theories, which together form a nine-step model for change management in newsrooms. The most relevant researchers that contribute to the creation of this model are John P. Kotter, Sharon Peters, E. H. Schein and Gary Yukl. Some theories of news media business environment complete the model.

The method of this qualitative study was a case study. The case study was conducted by observing work culture in the editorial office of Ilkka and Pohjalainen and by interviewing both managers and employees of Ilkka and Pohjalainen. The interviewees were chosen by convenience sampling. All interviews were conducted in Finnish and translated into English. The data was analyzed with the help of Material Focused Content Analysis, which was developed by Miles and Huberman. The results of this study were confirmed by two surveys.

As a major finding, this study confirms that the manner in which change projects are executed does matter. The model of change management in newsrooms can prevent failures and help newspaper companies to avoid having exhausted employees and financial losses. This model provides new insights for dealing with all the threats, challenges and problems, which change management in newsrooms causes. This model is a valid guide for managing newsrooms in the continuously changing field of media business.