Security policy rules optimization and its application to the Iptables firewall 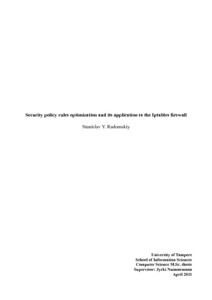 The security of a network which is being connected to the Internet is of the highest importance especially if this network belongs to a private company or a bank. Many different methods have been invented and are currently used in order to prevent harm that can be caused by perpetrators to the local network. One of the most commonly used methods is a firewall.

In order to make network more secure, we have to make sure that firewall implements a given security policy and makes it efficiently. The ruleset should be examined for the presence of errors such as duplicated, shadowed and conflicting rules and those errors should be eliminated if found. Rules should be also rearranged to make filtering optimally efficient. Rule rearrangement could accidentally cause a change in the security policy and we have to make sure that it will not happen.

In this work we consider different existing optimization approaches, both static as well as dynamic, and suggest a combination of their best features and improvements. We make sure that the suggested optimizations will not change the security policy of the initial ruleset at any time. We also consider peculiarities of the Iptables firewall and show how the suggested method can be applied to its ruleset.