Affect regulation strategies and their associations with subjective well-being: An international comparative survey 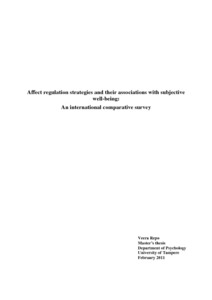 Participants from Australia, Finland, Germany, Italy, India, Portugal, Sweden, the Netherlands and Great Britain (N=507) evaluated the frequency of use and perceived efficacy of affect regulation strategies for feelings in general and participants from Australia, Finland, Germany, Italy, the Netherlands, Sweden Great Britain, USA and Denmark (N=626) for sadness using a modified version of the Measure of Affect Regulation Styles (MARS). Life satisfaction was measured using the Satisfaction with Life Scale (SWLS), emotional well-being was measured with items from RAND 36-Item Health Survey and perceived general health was measured using a single item.

Factor analysis produced four affect regulation categories depicting perspective-taking, environmental strategies, analysis and action oriented strategies and distraction. Multiple analysis of variance showed analysis and action oriented strategies to be the most frequently used and perceived to be the most effective in regulating feelings in general and sadness. Environmental strategies were usually the least used and perceived to be the least effective. There was slight variation in the results between countries and some strategies were used more frequently or perceived to be more effective in some countries than others. Perspective-taking strategies had the most positive associations with life-satisfaction, emotional well-being and health. The associations between diversionary strategies and measures of subjective well-being were consistently negative. The perceived efficacy of environmental strategies was positively related to satisfaction with life and perceived health. Some differences in these general trends were observed when analyzing regulation of feelings in general and sadness separately.

The results supported the inclusion of environmental means in the collection of affect regulation strategies. The results indicated that the regulation of sadness differs from the regulation of feelings in general. Future research should investigate the regulation of other specific emotions, such as anger. Future research should also address the question why some strategies are used more frequently and perceived to be more effective in some countries than others. Repeating the study using objective in addition to subjective measures of well-being and health would produce valuable additional information.