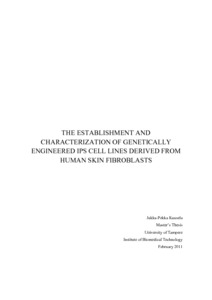 Fluorescent human iPS cell lines, albeit partially reprogrammed were successfully established. However, as in hESCs, the transgene silencing phenomenon was also observed in iPS cells probably due to SIN-lentiviral based genetic modification. The aim to generate fluorescent cardiomyocytes was not successful. Despite of this, valuable information was acquired for future studies.