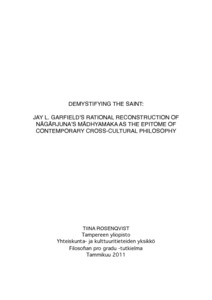 Cross-cultural philosophy approaches philosophical problems by setting into dialogue systems and perspectives from across cultures. I use the term more specifically to refer to the current stage in the history of comparative philosophy marked by the ethos of scholarly self-reflection and the production of rational reconstructions of foreign philosophies. These  reconstructions lend a new kind of relevance to cross-cultural perspectives in mainstream philosophical discourses. I view Jay L. Garfield’s work as an example of this.

I examine Garfield’s approach in the context of Nagarjuna scholarship and cross-cultural hermeneutics. By situating it historically and discussing its background and implications, I wish to highlight its distinctive features. Even though Garfield has worked with Buddhist philosophy, I believe he has a lot to offer to the meta-level discussion of cross-cultural philosophy in general.

I argue that the clarity of Garfield’s vision of the nature and function of cross-cultural philosophy can help alleviate the identity crisis that has plagued the enterprise: Garfield brings it closer to (mainstream) philosophy and helps it stand apart from Indology, Buddhology, area studies philosophy (etc). I side with Garfield in arguing that cross-cultural philosophy not only brings us better understanding of other philosophical traditions, but may enhance our self-understanding as well. I furthermore hold that his employment of Western conceptual frameworks (post-Wittgensteinian language philosophy, skepticism) and theoretical tools (paraconsistent logic, Wittgensteinian epistemology) together with the influence of Buddhist interpretative lineages creates a coherent, cogent, holistic and analytically precise reading of Nagarjuna’s Madhyamaka philosophy.