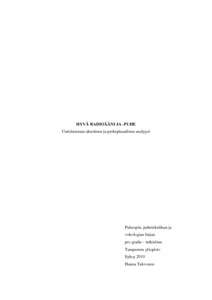 This study aimed to investigate what is regarded as a good radio professional’s voice and speech in Finland and whether different listener groups differ in their evaluation. Speech samples of professional Finnish radio speakers (41 females, 20 males) were recorded from news castings. The samples were evaluated for thirteen (13) parameters – such as suitability for radio voice, suitability for newscaster voice, fluency, clarity of articulation, speech rate – and overall impression by 6 naive listeners and 7 voice professionals. The thirteen parameters were evaluated on a visual analog scale and the overall impression by a number (4-10). The samples were acoustically analyzed for mean fundamental frequency (F0), F0 range, standard deviation of sound pressure level (SPL) and long-term average spectrum (LTAS). LTAS was studied by calculating the sum of sound energy levels every 25Hz filter bands in the ranges of 0-1kHz, 1-2 kHz, 2-3 kHz, 3-4 kHz and 4-5 kHz. The strongest spectral filter band below 1 kHz was given the value zero and, thus, all the other bands were compared to it, which reflects the spectral slope.

The results suggest that voice professionals and naïve listeners evaluated radio and newscaster voice quality somewhat differently. However, both listener groups seemed to regard fluency and clarity of articulation as important characteristics of a good radio and newscaster speech and a softer voice quality (more tilting spectrum) as preferable for a female radio speaker. The strong correlations between voice quality and speech parameters point towards a rather holistic evaluation of speech in both listener groups.