Don't Stop the Music - Use of Mobile Phone Music Players 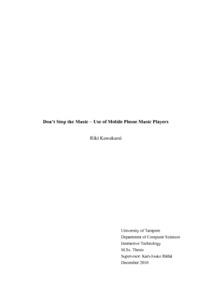 There is a growing convergence between the mobile phone and the popular portable digital music player as technology evolves. The manufacturers of these music-capable mobile phones are taking every advantage of it and more and more functions are incorporated to these devices. As more functions are added, the way we use the music-capable phones and consume music is eventually changing. This also causes challenges in further developing and designing the devices and the mobile digital music ecosystem.

As previous research is mostly concentrated on the usage of the portable digital music player, it was interesting to study if the users really listen to music with their music-capable mobile phones, how are they acquiring music; where and how they use these devices; and what kind of problems they have faced. To collect quantitative data, a voluntary online survey study with 151 respondents was conducted.

The survey data shows that the available internet connection in music-capable mobile phones encourages the users to download music straight to their phones although copying music from friends, etc. stayed as the most popular method to acquire music. The users appreciate having a single device combining a phone and a music player, allowing them to be mobile with their music, especially when travelling. However, the more complex device causes controlling problems to the respondents, not to mention network connection problems.

The results underline the fact that the mobile phone manufacturers have to take into consideration the usability problems brought up by the more complex devices when designing their latest music-capable mobile phones.