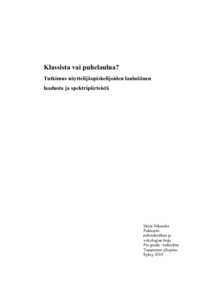 The aim of this study was to investigate what is regarded as a good singing voice quality among future actors and what spectral characteristics may be regarded as preferable. Relationship between perceptual voice quality and characteristics of long-term-average spectra (LTAS) were focused on. Of special interest was the relationship between voice evaluation and the possible singers’ or actors’ formant cluster (a strong sound energy concentration at frequency bands 2–3 kHz and 3–4 kHz respectively).

Samples were collected from 11 female and 10 male student actors. They sang a verse from a Finnish folk song, two times from two different pitches (ranges g–a1 and c1–c2 for the females and one octave lower for the males). In total of eight voice experts (5 theatre professionals and 3 speech trainers with classical singing training) evaluated the voice quality of the samples using a visual analog scale (VAS), 0 being poor quality and 200 being excellent quality. Additionally, they marked whether they found the voices suited for music theatre, musical, neither of those, or both (suitability). From each pitch, the sample (out of two trials) that was evaluated as better was chosen for acoustical analysis.

The perceptual quality ranged from 64 to 160, thus none of the samples were evaluated as very poor or excellent but clear differences existed, enabling the study of preferred vocal characteristics. LTAS were made and the level differences between the strongest spectral peak (below 1 kHz) and the strongest peaks between 1–2 kHz, 2–3 kHz, 3–4 kHz and 4–5 kHz were calculated. Relations between the level differences and voice quality and suitability for various music tasks (music theatre, musical) were also investigated.

At a higher pitch range no specific spectral correlates of good voice quality were found. Mostly actor’s formants were seen in the LTAS for both males and females. No clear relationship was observed between voice quality and suitability for music theatre or musical. The voice quality correlated on the lower pitch with the relative sound level in the frequency bands 3–4 kHz and 4–5 kHz for the females and with that of the frequency band 1–2 kHz for the males. At lower pitch good singing voice quality of future actors resembled more a good speaking voice quality than classical singing voice quality. Speech-like singing may be seen as preferable since due to electric sound amplification a singer’s formant cluster is not needed in theatre singing. Furthermore, a singer’s formant cluster requires a special vocal tract setting, which makes the timbre ‘operatic’. It may not suit other than classical music. Speech-like singing is also prone to ensure the intelligibility of the verbal message.