THE IMPORTANCE OF BEING SEEN: Postmodern visual culture of the United Arab Emirates and content analysis of female Emirati self-portraits in Flickr 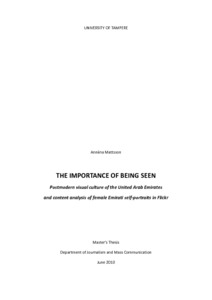 This study examines self-portraits of young women from the United Arab Emirates in the online photo-sharing website Flickr. The primary focus of this research is to study how young Emirati women represent themselves and construct their identities in new media through visual self-representations.The study concentrates on the images of members of Flickr group BanaaT UAE, out of which 170 members‘ images are selected as a sample for content analysis. The sample of self-representations is subjected to a historical and cultural comparison and contemplation with emphasis on national identity politics. In the analysis, the photographs are analysed against a backdrop of the history of the UAE, women‘s social standing, local and colonialist visual traditions as well as new information and communication technologies (ICTs).The research findings indicate that the young Emirati women do not publish classic self-portraits with identifiable features as out of the 8,248 images studied in all, just seven included recognisable facial features, six of them children‘s and only one young woman‘s. Despite this, the study concludes that for these young women, Flickr is both a site of display as well as audiencing with its own socialising practices. Indeed, the photographs studied appear to have gotten their meaning from the fact they have been put on exhibit, underlying an importance of being seen.