THEATRE OF DENIAL. How the International Community Avoided Interference in the Rwandan Genocide, Examined by Using Erving Goffman?s Theatrical Frame. 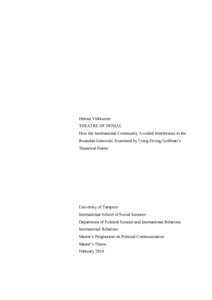 This master's thesis examines the international community's lack of interest in interfering in the Rwandan genocide that took place in the spring of 1994 as an act of theatre. The argument of the paper is that the leaders of the most powerful Western nations knew that a genocide was taking place in Rwanda, but due to the lack of strategic importance of this small eastern African nation, action to stop the genocide was considered unnecessary. However, in an attempt to maintain their public image, certain Western countries, namely the United States, France, and Belgium, seemed to be actively working on a resolution to end the violence in Rwanda on the arena of the United Nations (UN).

When looking back at the real intentions and actual actions of these states, one is reminded of a theatrical play. All the elements of a dramatic piece of theatre are present; actors with dual interests trying to convey the audience of their concern over a nation left at the hands of an oppressive regime. This is why this paper examines case Rwanda by using sociologist Erving Goffman's theatrical frame.

With Goffman's theatrical frame as the method of the study, this thesis is methodoriented. Goffman identifies the key elements of a play as follows: the theatre where the play takes place, the actors, and the audience. For the purpose of this thesis, the theatre is the UN. The actors are individual states, carrying different roles. As in any dramatic performance, the classic roles of villains and heroes can be identified. The audience of this play is the international public.

Theoretical framework of the paper is provided by discussion about the justification of humanitarian intervention. Three opposing views are presented. Realists oppose intervention to preserve the balance of power. State moralists approve of it with certain conditions, however underlining the autonomy of a state and its people. The cosmopolitan view considers state sovereignty to be inferior to international society of individuals, and thus advocates humanitarian intervention in all crisis situations.