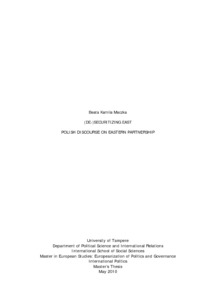 The subject of this thesis is Polish discourse concerning the Eastern Partnership. The subject creates an opportunity to analyze security policy under current geopolitical conditions in the context of Poland's membership in the EU. Polish literature concerning eastern issues is dominated by classical geopolitical thinking and numerous references to grand narratives. Therefore, the study explores the critical geopolitics theoretical approach. The theory provides a tool for understanding how identity, security discourses and geographical reasoning are being constructed. Security issues, especially those concerning Russia, are in Polish literature and public debates discussed by means of political realism, i.e. a fight over dominance, a sense of threat, and the need of power maximization. The aim of this thesis is to analyze arguments, which are used in Poland to justify the development of the Eastern Partnership Project. Relying on extensive studies on Estonia's situation, I want to follow through correlations between geopolitics and identity and its influence on Poland's perception of Polish and European security. The aim of the thesis was to show the construction of threats in Poland. I will try to answer the question of whether Polish discourse is actually as uniform as it is seen outside Poland, i.e. whether it is only dominated by references to grand narratives and hostile rhetoric. The thesis applies the methodology of the Copenhagen School, which argues that by talking security an actor aims to move a topic away from conventional politics and legitimatize extraordinary means to be used against the constructed threat. The thesis examines how Poland securitizes and desecuritizes its relations with eastern neighbours and what are the consequences of such movements.