Putin's Russia and the New Concept of Power. An analysis of Vladimir Putin's power argumentation 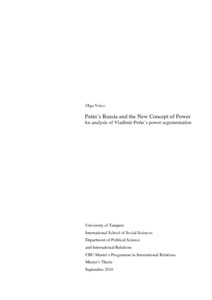 The purpose of this study is to explore what makes a state powerful in contemporary world. Debate on the nature of political power is one of the most complicated ones in the Theory of International Relations and the ever growing complexity of modern global processes provides new forums for discussion. Not only scholars are preoccupied with the changing concept of power. Rhetoric of political leaders makes an important contribution to the process of power construction. Argumentation on power, and namely on Great Power Restoration has been one of the focal points of Vladimir Putin’s rule. Thus, I have chosen Russia as an interesting and fruitful case for research.

The main research question of this study is ‘What kind of an understanding of what makes a state powerful emerges from Putin’s speeches?’ In order to answer it I will analyze Vladimir Putin’s argumentation on power applying Stephen Toulmin’s Model of Argument, concentrating on those speeches in which the issue of power has been discussed. Using Toulmin’s layout for the structure of argument I will identify its main elements – claim, data, warrant, rebuttal and qualifier. This will enable me to determine what is implicit in the argument and to create a coherent picture of what constituents of power are. The results of methodical investigation will be further put under theoretical analysis conducted according to the framework based on constructivist meta-theory and applying Barnett and Duval classification of forms of power.

The concluding part of this study answers the main research question revealing that the combination of compulsory, structural, and productive forms of power makes the state powerful.