Measures of Economic Segregation: An application to French data 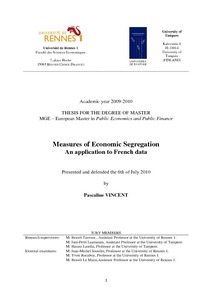 As various studies have shown (eg, Maurin (2004)), most cities have a stratification of residential space, separating wealthy districts from poorest neighborhoods with a concentration of social and economic difficulties. Most of the previous studies analyzing segregation have focused on racial segregation, whereas economic segregation has received little attention in the literature. We study here the spatial dimension of economic and social inequalities, analyzing the allocation between neighborhoods of households themselves unequal in terms of income. We formalize the issues we should address while measuring segregation and analyze some indexes. We then provide an empirical study for several urban areas in France among five years.