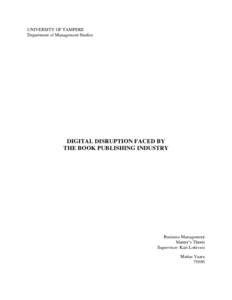 The theoretical framework used in this study was chosen to provide a foundation for examining a disruption in an industry. To offer a multidimensional view of the complex subject, the framework was composed of three levels of inspection: the technology level examines the digital forces as a disruptive technology, the company level looks at book publishers as incumbent companies facing a potential disruption and the industry level studies the disruptive changes on the dynamic of the industry.

The research was made using the methods of a qualitative case-study. Its purpose is to describe and explain a multifaceted and ongoing phenomenon. Empirical evidence was based on the interviews of industry experts and relevant newspaper, magazine and academic articles. The interview material was examined using the methods of inductive content analysis.

The analysis of the study suggests that the book publishing industry is being disrupted. On the technological level, the digital forces are redefining the book and its role in spreading information. This has provided a foundation for disruptive innovations that undermine the business model of traditional publishers.

On the company level, organizational dynamics and the historical perspective of publishers curb their ability and interest to utilize the digital forces. Publishers are forced to reinvent their business and let go of traditional ways of defining their role.