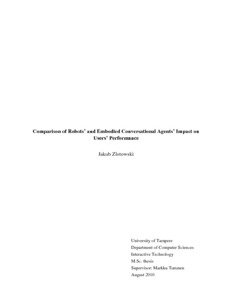 Robots and Embodied Conversational Agents (ECAs) are two technologies that strive to make computers more accessible for their users by incorporating physical body. Both have been widely used in different domains, such as education or entertainment. However, relatively little attention has been paid to specific qualities of these technologies. The primary focus of this paper is on comparison of robots’ and ECAs’ impact on users’ task performance. An experiment with 16 participants was conducted in between-subjects design. Subjects were asked to solve mathematical problems on a computer. Moreover, each participant was interacting with either a small robot-rabbit or its computer agent version, which provided them with feedback on their task performance. The data from a post-test questionnaire regarding the interaction and the task performance was analyzed using Mann-Whitney U test, and independent and dependent samples t-tests. The results show that both the robot and the ECA helped participants to focus on the task and the amount of time required to solve a problem decreased during the course of the experiment. Moreover, it took participants more time to solve a problem in the robot’s than the agent’s condition, but participants were more forgiving for the robot’s than the ECA’s repetitive feedback. Furthermore, the robot and the agent were liked, and the interaction with them was rated as entertaining and fun. These findings have important implications for a choice between these 2 technologies as educational and entertainment tools.