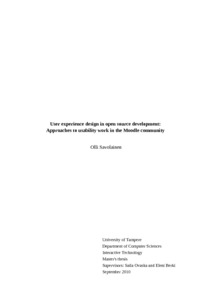 Usability work is problematic in open source software development on many levels. There is often no documentation or explicit research of user goals to drive design, no user experience vision to direct development, no usability testing, and typically no resources allocated for usability work. No usability practitioners are usually employed, and doing usability work is hard due to the community value system being focused on concrete results. An attitude of “code is cheap” leads to a tendency to skip user research, design and validation before implementation. However, developers in open source communities do get feedback from actual users. Also, software development work is iterative, as recommended in user-centered design, so there is some foundation to base usability efforts on.

This thesis builds on a review of the observations made about usability in open source literature. It is followed by presentation of the Quiz user interface project in the Moodle virtual learning environment project. I introduced needs of a user group of the already existing Quiz module, which had not been considered previously, into the design of the user interface. I carried out interviews of users and stakeholders, and iteratively designed the user interface using prototypes, usability testing, and community feedback, in each phase of the project. The results of this project are integrated in Moodle 2.0.

As main results, I present observations of the current state of the usability engineering of the Moodle project, followed by proposals for directions to take in the project, as well as in open source projects in general. The aim of these proposals is to help make the usability body of knowledge an active and permanent source of insight in development, while keeping open source projects accessible and attractive to volunteer developers. I suggest ways to engage the community in usability work and propose increasing usage of low-fidelity usability testing in development. I then discuss how working circumstances of usability practitioners could be improved and propose various tactics to learn about users in an open source context.