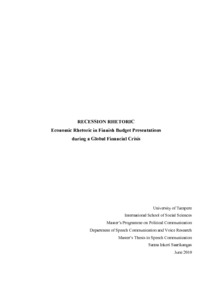 The aim of this study is to explore and analyze recession rhetoric - the ways in which the leading force of economic and fiscal policy in Finland, the Minister of Finance, addresses his audiences during a global financial crisis. The material consists of five budget presentations, held in the period of 2007 to 2009 in front of the Finnish Parliament and the Finnish Economic Association. These presentations are seen as persuasive speeches, where the combination of contextual factors and argumentation comprise their rhetorical power.

The theoretical framework is found in the rhetorical tradition within communication, as well as in argumentation analysis. The contextual factors of the budget presentations are analyzed with the help of Lloyd Bitzer's situational view on rhetoric. They include the constraints, exigence and audience present in the situation. In addition, the role of the rhetor is explored. Another guiding theory is Chaïm Perelman's argumentation theory, which is used in order to explain the role of the audience, the underlying premises guiding the argumentation and the used argumentation techniques.

The rhetor of the budget presentations is the Minister of Finance, Mr Jyrki Katainen, representing two institutions, the ministry and the government. The rhetor wishes to strengthen the ethos of his institutions and relies on argumentation from authority. The constraints are connected to the forum: the rules and regulations of the parliamentary plenary sessions and the traditions of the Economic Association do not only guide the time and place for the presentations but also set the outline for their structure, language and thematic choices. The controlling exigence is the ongoing global financial crisis. The current crisis is dissociated from the previous economic downfall in Finland, the depression of 1990's.

There are multiple particular audiences which the budget presentations address. The rhetor needs to convince the members of the parliament, both from the governmental and opposition parties, to support the budget proposal. Approval from economic experts and citizens is needed, so that trust, a necessary component of economic activity, will remain in the society. The attention of the media is required in order to pass the word to the wider public. The language of the presentations is not overtly colourful, but some vivid expressions and metaphors are used. In addition to the particular audiences, the speaker has constructed a universal audience, an idea of the Finnish society, whose values and beliefs work as a guideline for the argumentation.

Pathos amongst the audience and identification with the rhetor is awoken with the help of excessive yet ambiguous use of the pronoun ‘we'. It is also used in order to stress the universality of the arguments. The rhetoric also relies on logos, the seemingly logical economic facts, figures and calculations which are even used in a ritualistic fashion. The cultural aspects of Finland, stressing homogeneity and consensus, work as a reaffirmation to the reasonableness of the argumentation and leave less room for alternative views. A major trend in political communication, mediatization, is also visible. The speeches reveal the struggle for the domination of the centre in Finnish politics.

The presentations utilize the causal relationships found in macroeconomic theories and the perceived long line of Finnish economic policy, together with the belief in the Nordic welfare state. A close connection is drawn between economic growth and welfare, and people are most of all seen as economic creatures or objects for decision-making. The budget presentations reflect the movement of economic policy rhetoric away from the logic of politics, towards not only the logic of media, but also increasingly the logic of economic realities and necessity rhetoric.