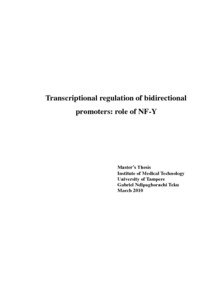 BACKGROUND: About 11% of human genes occur in divergent pairs such that both genes are located on opposite strands of DNA, and their immediate promoters are overlapping. The overlapping proximal promoter of both genes form an intergenic region called a bidirectional promoter which is less than 1000 base pairs in length. There is evidence that some cis-regulatory elements in bidirectional promoters control the transcription of both flanking genes. CCAAT boxes are one of the most abundant cis-regulatory elements in the human genome. NF-Y, a heterotrimeric transcription factor, activates CCAAT boxes and requires both the CCAAT box and specific flanking nucleotides for DNA binding.

CONCLUSION: These results are in support of NF-Y's essential role in the general and activated transcriptional regulation of bidirectional gene pairs. This work provides an important contribution in understanding the regulatory mechanism of bidirectional promoters and, in turn, their subsequent biomedical applications.