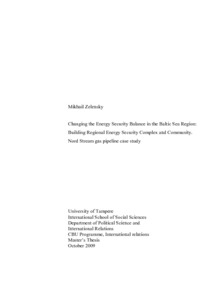 Kansainvälinen politiikka - International Relations
This publication is copyrighted. You may download, display and print it for Your own personal use. Commercial use is prohibited.

Construction of the Nord Stream gas pipeline has recently become a topical issue not only for mass-media, but for academic research as well. Surprisingly, in a world where security is ranked among the top priorities of a state's and individual's existence, whether we speak of military, economic or any other type of security, the Nord Stream "affair" is so far regarded as a strictly political venture or in some cases as a grand threat to ecology. Few academic writings have appeared that would analyse the pipeline project more profoundly, with a certain analytical framework and theoretical grounding involved.

My claim is that the best option suitable to find out, what actually Nord Stream project brings into the Baltic Sea Region and what the implications for the regional system of international relations will be, is the Securitization Theory offered by the Copenhagen School. However, theoretical grounds of this research orientation originating from the early 1990s need to be updated for current conditions, when energy security becomes vital. Its main instrument for analysis - the Speech Act Theory - is also underdeveloped in its application to international relations' studies. Therefore, in the given thesis I attempt to make one step further in the development of the Regional Security Complex Theory produced by Barry Buzan and Ole Wæver: applying the Speech Act Theory as an instrument for revealing securitizing moves in speeches of policymakers and other influential persons in the Baltic I attempt to prove that new entities are being created in the region due to the pipeline construction. Namely these are Regional Energy Security Complex and Community. Within each of these entities threat perceptions and grammar of (de)securitization are shared.