CONVENTIONAL ARMS CONTROL: STRATEGIES FOR SECURITY OR FOR SIMULATION? INTERNATIONAL REGIMES AND THE CASE OF THE EUROPEAN UNION CODE OF CONDUCT ON ARMS EXPORTS 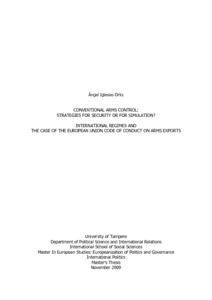 This thesis is an assessment of the current arms control agreements that regulate the transfers of conventional armament. Even though states acknowledge the threat and violent consequences that the legal, and illegal, arms trade represent, the control agreements they enact fail to successfully regulate and limit the international arms transfers. This study argues that these control agreements are ineffective. This argument is linked to the non-compliance of states to follow arms control regulations when security issues and economic interests are involved. Some agreements are merely smoke-screen measures in that they only stipulate regulations must be followed on a voluntary basis, despite the fact that the tragic repercussion of armed violence continues to occur. Due to this empirical ineffectiveness, the causes of, and possible solutions to, these situations are analyzed.

The main concern of this study is to propose the implementation of instruments that enhance the effectiveness of conventional arms control, as well as consider new methods regarding security cooperation. It takes a critical approach of the state-centric conceptions about military means and the arms dynamics that determine the relations among states. Power dynamics within the international system still give priority to the production and transfer of armament, using justification of the status quo with classical conceptions of national security and the right of self-defence as a pretext to continue the arms trade.

In the theoretical framework, the structural realist and neo-liberal institutionalist approaches are presented with the intention to understand the perspective of the states about achieving national security and the possibilities for security cooperation, despite the permanent presence of the security dilemma. Nevertheless, the main argument of this thesis asserts that the formation of an international institution based on the European Union policies on conventional arms can improve the overall situation in security cooperation. Thus, postulates from the regime theory approach are extensively presented, including the concept of international regime, its formation process, features, and types.

The analytical section of this study is focused in the application of the European Union Code of Conduct on Arms Exports. The analysis attempts to verify if the Member States have applied the criteria included in the Code of Conduct when transferring armament. Specifically, the analysis will be guided by the teachings of Carl Patton and David Sawicki by applying the sixstep process of policy analysis method.

This thesis proposes that the creation of a comprehensive international regime, including a binding regulation in the transfers of specific armament and the implementation of diverse strategies of economic and social development, can improve the overall situation of security and development for the European Union and nearby regions, such as Africa and the Middle East.

The regime proposals presented are backed by the interest-based regime approach in which neo-liberalism proposes a certain degree of institutionalism. This is complemented by the constructivist-cognitive approach, where knowledge and the establishment of new practices may create new forms of cooperation in security, and, consequently, change the structure of the current international system. It is acknowledged that the effective control of conventional armament goes beyond the national sphere and, therefore, multilateral action is needed. Arms control and security must be obtained by different methods and actions that permit states to achieve security without the permanent acquisition of weapons. Until this can happen, arms control will not be successfully applied.