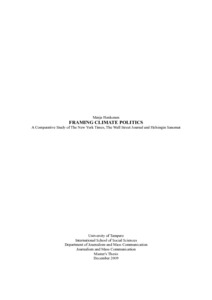 The central research questions of this thesis are how is climate politics framed and how is its coverage  affected by journalistic norms and codes of conduct. It consists of a review of previous literature on the notions of journalistic objectivity, the theory of framing and environmental communication, and an empirical study of the climate politics coverage of three prestige newspapers: The New York Times (USA), The Wall Street Journal (USA) and Helsingin Sanomat (Finland). The thesis also includes a brief introduction to the history of climate politics.The coverage of the three newspapers was sampled in eight two week periods between the years 2003 and 2008. The time frame of this purposive sample was selected according to certain significant events in the field of climate politics. These events include the heatwave of summer 2003; the Kyoto treaty taking affect and the Hurricane Katrina aftermath in the year 2005; the release of the Stern report and the film An Unconvinient Truth in the year 2006; the release of an IPCC report and the United Nations Climate Conference in Bali in the year 2007 ; and the United Nations Climate Conference in Poland in the year 2008. The eight samples were analysed with both quantitative and qualitative content analysis methods.As a result of the content analysis seven frames for climate politics were identified. These frames include the thematic and/or episodic frames of ”Era of Climate Change”, ”Planetary Crises” and ”Unsureness”; the issue spesific frames of ”Technology as a solution” and ”Environment versus Economic Wealth”; and the generic frames of ”Political/partisan Competition” and ”Competition of Countries”. There were also several stories that merely mention climat change as a serious political problem comparable to poverty or hunger.The most common frame of all seven was the ”Era of Climate Change”, in which the accommondation to climate change and communal responsibility was emphasized as a central element of climate politics. The ”Political/partisan Competition” frame, on the otherhand, was found only in the two American newspapers. This would implicate that the consensus of Finnish climate politics is also reflected in news coverage. Contrary to the American newspaper Helsingin Sanomat gave special emphasis on national unity, whereas The New York Times seemed to rebel against the climate policies of the George W. Bush government. The most critical and even sceptical coverage was found in The Wall Street Journal.Overall, the coverage on climate politics increased significantly from one sample period to another. There was a slight decrease in the amount of coverage between years 2007 and 2008: this might indicate that the economic crises took away some intrest from environmental questions.