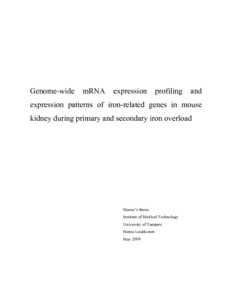 Biokemia - Biochemistry
This publication is copyrighted. You may download, display and print it for Your own personal use. Commercial use is prohibited.

Background and aims: Hemochromatosis is a disease characterized by excess iron deposition in parenchymal organs. Failure to control iron absorption and release from cells is often caused by inability to properly induce hepcidin expression. This defect is in turn caused by mutations in hepcidin or its regulators Hfe, HJV, and TfR2. In this study, expression profiles of these regulatory proteins in kidney was explored and, using genome-wide mRNA expression profiling the overall effects of iron overload in kidney was determined.

Methods: cDNA microarray technology was used to determine the genes with altered patterns in two mouse models: dietary iron overloaded and Hfe-/-. Additionally, microarray data were analyzed in order to identify molecular pathways over-represented among the regulated genes. Altered expression of genes selected from the microarray data, as well as the expression patterns of certain iron-related genes, were confirmed and explored using Q-RT-PCR.

Results: The microarray analysis revealed many genes that were either up- or down-regulated during iron overload. However, only few genes could be directly linked to iron overload or hemochromatosis. The regulation of most of the genes which expression profile was double-checked using Q-RT-PCR was confirmed. Microarray data revealed few pathways that were over-represented throughout the data. The iron-related genes, of which expression turned to be altered in kidney, had the same kind of expression pattern as for example in the liver. The expression of hepcidin-genes in kidney is controversial, but the present data indicates that neither hepcidin1 nor hepcidin2 are expressed in this organ. The results also revealed the absence of HJV mRNA in the kidney.

Conclusions: According to the present data the expression of many genes is altered in response to iron overload, including several iron-related genes. Therefore, it can be concluded that kidney has an important role in iron homeostasis, even though it can not synthesize hepcidin.