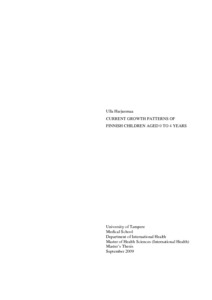 Growth monitoring by anthropometry is used worldwide to assess health and nutritional status of individual children and populations. Prerequisite for successful appraisal is the utilization of a reliable growth reference against which to compare the growth. The Finnish national growth reference was introduced in 1986 but studies on its adequacy for assessment of contemporary linear growth patterns of Finnish children have not been published since. WHO launched a prescriptive growth standard in 2006 promoting its universal use worldwide but its applicability for Finland has not been evaluated.

The aim of this study was to describe the current growth patterns of Finnish children by assessing it against the Finnish reference and the WHO 2006 standard and compare the prevalence of growth faltering identified by the references. Mixed longitudinal sample of 2809 children (17780 measurements from boys and 17346 from girls) aged 0-4 years and born between October 2003 and September 2004 were obtained from Tampere Municipality child health clinic register. Growth curves were constructed from the data using LMS method and plotted against the reference curves. Percentages of measurements that exceed the screening limits for growth faltering were also calculated and compared.

Height-for -age (HFA) of the sample children exceeded the Finnish reference values at each assessed centile (5th, 50th and 95th) at 12 months and the difference had a slowly increasing pattern so that boys were 1.5 cm taller and girls 1.0 cm taller at 48 months . The relative weight-for-height (WFH) mean was slightly lower than the reference mean after 6 months and at 48 months it was even. In comparison with the WHO standard, the sample children were 1.0 cm longer and 0.3 kg heavier at birth. All assessed centile curves were above the standard curves at each age and at 48 months the difference in height was 1.4 cm in boys and 0.8 cm in girls and in weight 0.9 kg and 0.6 kg respectively. The WHO reference identified fewer children as wasted, slightly more as obese or stunted and considerably more as very tall compared to the Finnish reference.

Average height of Finnish children has increased but relative weight has decreased or remained constant in most ages between 0 to 4 years since construction of the Finnish national growth reference. Compared to the WHO reference, Finnish children were slightly taller and heavier at each assessed age. Discussion is needed whether 1.5 cm increase in boys' height and 1cm increase in girls' height at 48 months justifies the updating of the Finnish growth reference. Since the WHO standard values for weights are lower and it shows higher levels of obesity, its adoption in Finland should be considered and the public health implications of the adoption evaluated. However, further study is needed to assess if the same growth pattern as was seen in 0-4 year old children applies also to older children and adolescents.