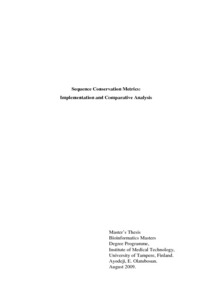 Background and Aims: Multiple Sequence Alignments (MSAs) help identify regions of similarity and dissimilarity between its constituent sequences, which is essential in understanding structural, functional and evolutionary relationships of DNA or protein. Different authors from different fields have made efforts to develop new quantitative methods or apply metrics used in other fields in scoring conservation at different positions in MSAs, using different programming languages. This work is an effort to implement many of these methods on a single platform familiar to most bioinformaticians, which will allow direct comparison of the methods, and make them more accessible as a tool to the research community.

Results: The correlation result agrees closely with that of a previous study. The independent counts scheme gave the best performance as compared to other weighting options. Relative Entropy, Variance and the Jensen-Shannon Divergence were the best three methods as measured by their performance on the catalytic site dataset.

Conclusion: The conservation metrics were successfully implemented and comparative evaluation carried out. A correct specification of the true positive and true negative classes is however needed in order to make generalised statements about the comparative performances of the methods tested.