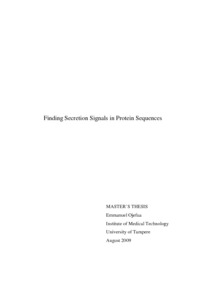 Background and aims: Signal peptides are central to biological processes in that they direct proteins to their proper destination after synthesis. If the signal sequence in a nascent was changed, the protein could end up in a wrong cellular location. Some proteins known to be secreted have had their signal peptides unpredicted by existing signal peptide prediction tools. The aim of this study is to pre-process these proteins in order to optimize their start sites and apply a combined set of tools to finding their signal peptides.

Methods: The methods used here took a step backwards by starting at the DNA level of a given protein. DNA flanks were extended to allow for alternative gene prediction before translating back to proteins. The optimized protein sequences were analyzed using a set of signal peptide analysis tools. The results of these were compared with from the original protein sequences.

Results: Signal peptide prediction was enhanced in the optimized sequences. An actual prediction of the presence of signal peptide was seen in 2 out of the 5 proteins studied.

Conclusion: The results indicate that the methodology used in this study can help in future design and analysis of signal peptides. It also shows that the hypothesis that non-classical proteins could be predicted by using alternative gene predictions is supported.