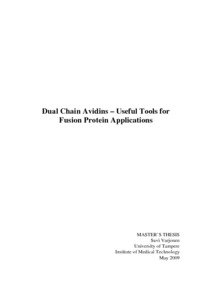 Background and aims: The aims of this study were to investigate the ligand binding properties and structure of dual chain hybrid avidins (dchAvd) as well as to discuss their applicability in biotechnological applications. Another aim was to optimize the production and purification of these fusion proteins. The study focused on dchAvd structures where a cpAvd5 4 is genetically combined with a cpAvd6 5 streptavidin, AVR2 or AVR4 protein (dcASA, dcAA2, dcAA4). The sequences and biochemical properties of these proteins differ from those of avidin thus serving as a good evaluation basis for the functionality of dual chain hybrid avidins.

Methods: dchAvd were produced in E. coli in bottle and in pilot-scale fermentor as well as in Bac-to-Bac insect cell production system. The proteins were purified with affinity chromatography and the purification, yields and purity were monitored by SDS-PAGE and Western Blot. The biotin binding properties of dcAA4 were studied with fluorescence spectroscopy and Biacore optical biosensor. The oligomerization state of dcAA4 was studied with HPLC and its heterogeneity was shown by immunological methods where monoclonal antibodies against avidin and AVR4 were used.

Results: dcAA4 was produced significantly better than dcAA2 and dcASA in E. coli bottle production. dcAA4 was produced very well in the fermentor. All three proteins were produced to certain extent in insect cell production system but none of them could be isolated. According to HPLC measurements dcAA4 is a pseudotetramer. dcAA4 bound biotin with high affinity but with lower affinity than avidin and AVR4. Both avidin and AVR4 monoclonal antibodies recognized dcAA4.

Conclusions: According to the ligand binding studies dcAA4 had two distinct biotin binding sites. The other one bound biotin with higher affinity and resembled wt avidin biotin binding site, and the other one bound biotin with weaker affinity. dcAA4 was a heterogenic, pseudotetrameric protein. The dchAvds are promising fusion proteins for a variety of biotechnological applications raging from material cross-bridging to diagnostics.