Canadian Student Mobility and the Experience of National Identity Abroad 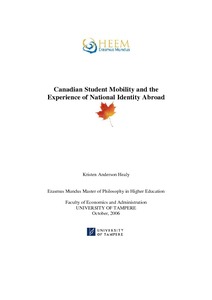 Hallintotiede - Administrative Science
This publication is copyrighted. You may download, display and print it for Your own personal use. Commercial use is prohibited.

Globalization, as a process and a phenomenon, is impacting societies around the world in both subtle and tangible ways. National borders are being transcended, blurred and, some contend, increasingly irrelevant. As key players in nationbuilding, governments and higher education institutions are responding to globalization using a variety of coping mechanisms. In Canada, foreign policy may be viewed as one of the ways in which the federal government attempts to help define, protect and project the concept of Canadian national identity. Meanwhile, Canadian universities are adapting to the challenges which accompany globalization by implementing internationalization strategies. One traditional, yet still relevant approach is through the provision of student mobility opportunities which enable Canadians to participate in overseas study. While the motivation on the part of students who take part in such endeavours is often for personal and, ultimately, professional gain, they inevitably assume a role in public diplomacy abroad. Consequently, there is an intersection between foreign policy and the practice of student mobility.

This thesis aims to explore the role that national identity plays in the international mobility of Canadian students, and to compare it with the federal government's promotion of Canadian values and identity abroad. The research conducted involved the collection of secondary data through a literature review, and primary data obtained through qualitative interviews. The main findings reveal that study participants experienced a heightened awareness of their national identity while they were abroad. The scrutiny and attention students received based on their citizenship, along with exposure to new perspectives and the increased salience of their national identity, required students to discuss, describe and explore what it means to be Canadian. While the International Policy Statement acknowledges the contribution by these students to public diplomacy overseas, the federal government is neglecting to fully capitalize on this opportunity. The dearth of comprehensive, federally funded scholarships represents a loss of investment in Canadian public diplomacy overseas, and a loss of opportunity for those Canadian students unable to afford to study abroad experiences.