Analysis of the Gene Expression Patterns of the Human Immunome 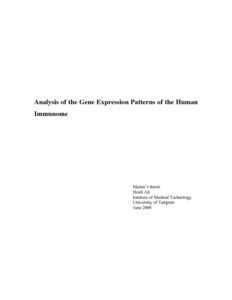 Background and aims: Genes and proteins involved in immune system are called immunome. A network is a system where nodes are connected to each other by edges. In gene network genes are nodes and tissues are edges, and vice versa in tissue networks. Network theory helps to find out the features of the network, such as degree, closeness and community structure of the network. The main aim of this study was to find out the patterns of gene expression in the immunome. Other aims were to find out the correlation between immunome gene expression and protein-protein interactions and the evolutionary age of important genes.

Methods: Immunome gene and tissue networks were created. Gene and tissue communities were mined from the networks with two community analyses. Common gene and tissue clusters were collected from these two community analyses. Degree and closeness values of clustered genes were compared to degree and closeness of immunome protein-protein interactions. The evolutionary age of clustered genes was studied. The correlation between degree in the tissue network and the number of genes in that tissue in the gene network was checked.

Results: The most important result was the discovery of 88 immunome gene clusters holding together 547 genes. The genes in the clusters have similar gene expression patterns. There is no correlation between immunome gene clusters and immunome PPI data. Degree and closeness values are divided evenly to different evolutionary levels. The tissue network yielded 203 immunome cluster tissues, which have similar sets of genes expressed in them. There is a strong correlation between degree of a tissue in tissue network and the number of genes in that tissue in gene network.