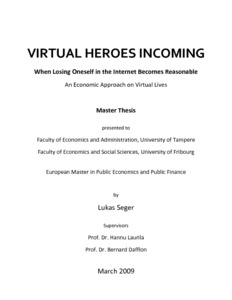 The relevance of the internet increased significantly in the last decade. Besides all technical achievements, also social structures are influenced by the technical progress and a considerable part of human interaction moved to the web. Some people live even more in the virtual space than in reality.What are the reasons to do so? By adopting emotions in economic theory it becomes possible to explain human behaviour motivated by non monetary reasons. The aim of this thesis is to reveal the costs and benefits of virtual lives. It will be shown under which conditions living in the internet might become a considerable alternative to "real" life.The intention is to add a new point of view to an ongoing discussion about the internet, social differences and redistribution. It is not the goal to present a complete theory about the impacts of the internet on human interaction.