Conflict(ing) narratives; scientific interpretations of the conflict between the government of Indonesia and Free Aceh Movement 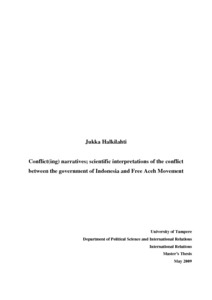 Kansainvälinen politiikka - International Relations
This publication is copyrighted. You may download, display and print it for Your own personal use. Commercial use is prohibited.

This thesis studied how the Aceh conflict is explained in scientific literature. The purpose of the thesis was to construct a post-modern understanding of scientific inquiries following neo-pragmatist understanding of scientific research. The object of my research was to analyse the scientific narratives regarding the conflict between the government of Indonesia and the separatist group Free Aceh Movement (Gerakan Aceh Merdeka –GAM). The analysis focused on five scientific narratives and the purpose was to find out why the Aceh conflict emerged.

The second chapter of the thesis examined various paradigms in peace research that are or continue to be influential in the field. It distinguished the theories into two groups, traditional and social constructivist perspectives and further argued that although the discipline of peace studies has cemented its position within social sciences, the field, nevertheless, is very fragmented. The third chapter constructed a post-modern perspective on scientific research. It was argued in chapter three how language in scientific inquiries can be understood in a dual sense. On the one hand, language is utilised by the scholars to represent the world and, on the other hand, academics apply it in order to cope with the world. The fourth chapter argued that scientific inquiries can be meaningfully seen as narratives or stories. The narrative approach was clarified as the method in this thesis. It was examined how narratives are generally structured and how an additional element in narratives was the rhetoric. The final chapter analysed five scientific narratives of the Aceh conflict. The first narrative presented a historical analysis, second was based on greed-grievances paradigm, third followed a wide array of Social Constructivist literature, fourth examined a positivist perspective and finally fifth gave an anthropological perspective.

The analysis showed how none of the interpretations succeeded in giving practical suggestions for resolving the conflict. Therefore, the tradition of how a theory meets practice, which is highly valued in peace and conflict research, has either been broken or the analysed conflict by the researchers was so intractable that scholars did not find any means to cope with it. The most interesting element of the inquiry was to locate the story with other stories and how they connect with each other.

The analysis showed how even the most recent scientific narratives did not provide any valuable new insights to the conflict. It would be presumptuous to claim for the utter insignificance of these studies but I would like to question the practical usability of them. In other words, instead of describing the conflict ever more clearly or attempting to find the truth of the matters, the focus could lay on the pragmatic questions. The analysis also showed that none of the presented narratives offered any precise means to solve the conflict. What is clearly lacking in these suggestions is the Rortyan utopia; a clear and practical vision of a better future world.