War or Peace for Finland? Neoclassical Realist Case Study of Finnish Foreign Policy in the Context of the Anti-Bolshevik Intervention in Russia 1918 – 1920 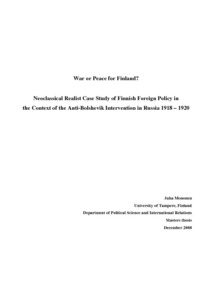 This thesis studies Finnish foreign policy decision making between the years 1918 - 1920 in the context of the Allied and Associated Powers intervention in the Russian Civil War. The selected case study is analyzed through two theoretical frameworks: John Herz's idealist-realist distinction of political thought and Randall L. Schweller's balance-of-interest theory. The former is used to analyze the interplay of power and ideology in international politics; the latter to study statesmen perceptions of power and interests of state actors.

The selected research method is a case study operationalized as a theoretically informed historical narrative. The first part of the thesis presents the international context of the intervention with a focus on the Great War, great power politics and Winston Chuchill's anti-communism. The second part analyzes Finnish foreign policy decision making in detail. The narrative is centered on the first President of the Finnish Republic K. J. Ståhlberg and his non-interventionist reasoning. The counterfactual is provided by an analysis of the interventionist politics of C. G. E. Mannerheim. The concluding chapter presents an overview of Finland's strategic choices and forwards a new narrative for Finnish foreign policy.

The question for Finnish foreign policy during the first years of the Republic was: war or peace for Finland? Under the leadership of Ståhlberg, Finland chose peace over war. Ståhlberg's vision was based on his conviction that military forces should be defence forces. Ståhlberg - the father of the end of history for Finland - created a realist liberal foreign policy tradition that was anchored in a belief of liberal democracy as the best form of human government valuing internal evolutionist development over international ambition. Ståhlberg's vision was powered by liberal optimism heralding that political freedom renders future wars unnecessary. This belief in transcendencing crude power politics eschews the cyclical tragedy of international politics.