"Have your say" : interactivity as a professional value in the BBC radio programmming 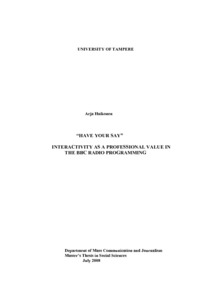 The study examines the value of interactivity in BBC radio programmes, as seen by programme makers, and more widely the changes and challenges it brings to news journalism. In the current competitive media climate news organisations have to provide new facilities and platforms for the audience because the way people consume news is changing. This research looks at how and why BBC news programmes, with the help of interactivity, have responded to these challenges, and to what degree news journalists think the audience should shape the news agenda. The research method is a qualitative analysis of the interviews with programme makers.

The issue of audience participation has its roots in the debate on the media’s role in strengthening democracy. Shortcomings of mainstream media have been expressed, among others, by those advocating public journalism and more recently, participatory journalism. The main message seems to be that traditional journalism has failed in its task to encourage dialogue between the people and their political representatives. Citizens are portrayed as passive observers of the world, and although they are sometimes allowed to appear in the news, the news agenda is set by politicians and elites. This has increased calls for rethinking of basic top-down journalism and the creation of more imaginative and inclusive forms of journalism. The aim of the study is to find out whether interactivity, as described by the interviewees, could help to meet those calls, and to determine how much the journalists feel threatened by a more active audience; and the extent to which journalistic practices are changing with interactivity. Ideas of public journalism and more recently participatory journalism form the basis for the theoretical framework of the paper.

The research finds no fundamental changes in the gatekeepers’ roles; citizens are seen as useful sources and they have a new, important role in enriching the news agenda, but editorial control remains with journalists. Traditional journalistic practises appear still to be relevant in the era of audience participation. The interviewees wanted to be responsive to the views and vision of the public but warned against promoting interactivity as a virtue in its own right.

For the BBC interactivity may serve as a survival strategy for the future. In response to changing audience needs it has introduced a range of interactive services and seems to have found a powerful tool in feedback opportunities that, it may hope, will help to continue to legitimise public service broadcasting.