Estonian Media: Concentration and Foreign Ownership After the Fall of the USSR 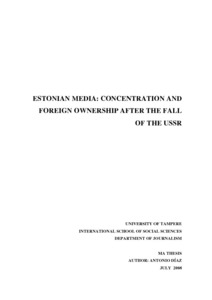 The object of this study is focused on the changes in the media market in Estonia from the time of its recent independence in 1991 due to the fall of the Soviet Union, until the present day.

In order to examine the problem, four main research questions were formulated. The first one deals with the impact of foreign ownership on the work of professionals in media organizations. It was asserted that the work is not shaped in any particular different way than when the media is owned by national companies. The second research question deals with concentration shaping the Estonian media landscape. It was discovered that it produces trends like tabloidization of contents and a tendency to sacrifice quality for commercial success. The third question deals with the changes in Estonian media system compared to the past Soviet times. There is a tendency to use foreign sources of information and the proliferation of yellow press, but also Estonian journalists have been very successful to reinvent themselves and explore new fields like Internet and other new technologies. The final research question deals with the future of media market in Estonia, which will remain highly concentrated in the short run, and positions Internet as the main field where the future generations of journalists can experiment new approaches to their work.

During the research, the qualitative method was widely used. A historical approach to the case study and the triangulation of the sources were considered the best way to optimize the results of the study.