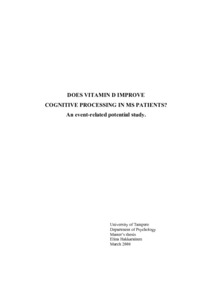 Impairments in cognitive skills are found in 40-65% of patients with multiple sclerosis (MS). A link between MS and vitamin D has been shown, and vitamin D´s advantages in central nervous system have been recently studied. In the present study, the effects of a high-dose (i.e. 1 µg) vitamin D’s prestage Etalpha on cognitive processing of MS patients were investigated. Cognitive processing was investigated by measuring event-related potentials (ERP) in a visual oddball paradigm. Four visual ERP components (P1, MMN, PN, and P3) were investigated. Both active and passive oddball conditions were employed, by asking subjects to respond to stimuli or to ignore them. ERPs were measured both before and ca. 24 hours after the drug intake. The aim of the present study was threefold: (i) to clarify whether the frequently presented standard stimuli and infrequently presented deviant stimuli are discriminated by the responses of the MS patients, (ii) to test whether the discrimination is dependent on the allocation of attention, and (iii) to clarify whether there is difference in discrimination before vitamin D intake and after it. 14 MS patients (5 men, 9 women, age range 17 years to 47 years, mean age 33 years) were investigated. The results of the present study revealed that three out of four ERP components discriminated the standard stimuli from the deviant stimuli. The early visual MMN component, however, was not elicited. Early exogenous components (P1 and MMN) did not show any sensitivity for cognitive effort, while subsequent endogenous components (PN and P3) did. The results revealed no significant drug effect for vitamin D in the amplitudes of the ERPs, but further investigation of effects of vitamin D to P3 latencies and MMN compared with a healthy control group is recommended.