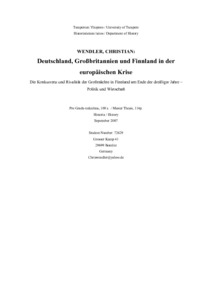 To analyse and compare the big powers’ perspective on a Nordic country seems to require at least as much consideration for their economic as for the political interests. Whilst the British legation was predominantly concerned with Britain's economic interests the German legation focused on political issues. This does not mean that German-Finnish economic relations carried less weight but reflects a different organisation of the German foreign policy establishment and a different perception of mischief.

Public opinion in Finland, culture and propaganda figure as secondary issues in both of the legations’ sources. Whereas the British were apprehensive of German activity in the North the German conservative minister noted damage to the German image resulting from repugnant Nazi policy at home and abroad.

Despite rising continental power German political influence in Finland suffered a substantial setback at the turn of 1936/1937. By the choice of Finnish voters a parliamentary majority on the left was established bringing to power a Centre-Left government and disposing a conservative president. The politics of the new foreign minister, Holsti, were disliked by the disposed Conservatives. The German minister in Finland, von Blücher, immediately adapted the Conservative’s negative attitude. He also developed a strong personal aversion against Holsti perverting his reports continuously. Criticising Holsti’s initiative to normalise strained relations with the Soviet Union Blücher aligned his position with that of Erkko – a right wing party fellow of Holsti. He had to acknowledge, however, the widely accepted political will to normalise eastern relations.

The reports of the legations were characterised by opportunistic distortions. Whereas the British were quick to report a decline in German political influence, the German minister qualified the meaning of the political change in Finland by questioning the stability of the Centre-Left government and Holsti's position therein. The Germans readily acknowledged the weight of Finnish-British notably economic relations. Beyond that acknowledgement there was German frustration with the new Finnish foreign policy that did not always find its way into official reporting. In looking for the information opportune to their interests both legations had no difficulties finding influential Finns that provided the desired assessments of Finland’s affairs.

Central in the concern of the big powers about Finland was Finnish foreign policy. In spite of an official assertion of an unchanged foreign policy the Finnish prime minister speaking in private labelled the United Kingdom a ‘protecting power’. Finns across the political spectrum, even Conservatives who traditionally stood for a close relationship with Germany, also desired a closer relationship with the UK. High-ranking political and weighty English business representatives descended in large numbers on Finland. Blücher, however, saw no sign of a formal political alignment and only acknowledged some concerns regarding future access to Finland’s natural recourses. This relaxed attitude must not have been universal since the British legation perceived nervousness and distress among junior members of the German legation. According to indirect evidence the German leadership was disgruntled.

The German-Finnish relationship had supporters in both countries including Göring and the grand old man of Finland, Mannerheim. While a rather forced visit of Holsti in Berlin did not solve political contradictions there were other unofficial high-level contacts that tried to alleviate stress in the relations.

In observing closely and trying to influence by various means the opinion of ordinary Finns and the capital’s elite a rivalry between German and British influence manifested itself. The reports about the official celebrations of the birthday of Finland’s revered Mannerheim are an example of the diplomat’s scrutiny. Their contrasting depictions and interpretations reveal conscious and unconscious whitewashing stemming sometimes from biased informants.

Germany’s perversion in the 1930s was initially perceived through the lenses of the inner-Finnish split between conservatives and social-democrats with the latter criticising fascism across Europe vigorously. As German policy became more radical – especially with the endangerment of peace in Europe during the Sudeten-Crisis, the pogroms of 1938 and the occupation of Prague – the conservative parts of the population and politicians were willing to criticise it and did so, though mostly in private. The German minister went as far as possible for a Reich’s civil servant in outlining the negative repercussions for Germany’s public and also more tangible interests in Finland in reporting to his foreign ministry. This is remarkable in light of previous whitewashing of reports. While there was ever more reason to criticise Germany the concurrent threat of war and entanglement which Finland wished to avoid at any price demanded a more radical interpretation of neutrality. Thus just when criticism of Nazi policy was spreading the government and the media consented to toning down their criticism of Germany in accordance with German diplomatic pressure to that end.

Britain’s role in the world of rising fascism enjoyed high respect in Finland. British foreign policy and the Finnish population shared the desire for maintaining peace in Europe. Absent from British official reports is how the UK’s role in undermining the integrity of another small state – Czechoslovakia – in Munich marred its image temporarily.

Germany went further than the UK in actually trying to shape her image in Finland. Propaganda was seen as a substitute for cooler political relations. Speedily transmitted German news items were placed in receptive Finnish conservative newspapers and used by the German minister as a basis for argumentation. Visits of outstanding speakers and the German radio’s ordinary broadcasts had an effect limited to a German speaking elite which also proved ambivalent. To reach the general public the German legation promoted military visits.

The German propaganda efforts attracted disproportionate attention in the British legation. Events including official German guests were carefully scrutinised and considerable room was devoted to evaluate the German propaganda’s motive and effect. German propaganda was not seen as threatening but rather as futile, however. The German minister, on the other hand, was jealous at the strong interest in ‘everything English’ as compared to the modest efforts of Britain, whose British Council had only recently been founded. The success was disproportionate: promotion of English culture and the advent of Anglo-American cinema attracted a comparatively high degree of interest among the wider Finnish public. The establishment of an Anglo-American share in popular culture became discernible.

The crises of 1938, especially the Sudeten crisis, brought about by German policy damaged the German moral reputation but served to increase her political clout also in the North. The League of Nations- and UK-orientated foreign policy of the despised Finnish foreign minister Holsti and came under attack by the still formidable conservative opposition. His position seemed increasingly unstable. A renewed commitment to western values by the Finnish Prime Minister in the run-up to the Sudeten crisis did not save him. The German minister seized upon the political constellation and helped to bring Holsti down. The minister’s subsequent euphoria was understandable in light of his long-harboured aversion against Holsti and close relationship with Holsti’s successor, Erkko. Such euphoria, however, proved not justifiable. Instead the German minister had to avoid inconsequential criticism of Erkko’s anglophile policies as he was told frankly that English desire for increased exports was well founded.

The British had no reason to worry. Erkko promised to defend the independence of the Finnish media against German pressure and put all his considerable clout behind supporting Finnish purchase of English goods.

The gross predominance of economic issues in British reports is contrasted by the German ministers almost complete disinterest in the issue. British economic difficulties in the thirties made trade a contentious issue that received much more attention than politics. Most noted was the contribution of trade with Finland to the general trade-deficit which seemed enormous considering the size of the countries’ respective markets. Meanwhile German-Finnish trade grew in volume while British-Finnish trade stagnated.

British industrialists highlighted the unfair methods that Germany employed for steering trade. The possibility of their subsequent demands for protectionism and control of trade being adapted by British politicians frightened Finnish industry. Some British officials were willing to employ scare tactics but diplomats on the ground recognised that the competitive disadvantages were home-grown. However, they eagerly supported their exporters. Pressure was exercised to influence public spending whenever the legation learned about planned acquisitions. Finnish politicians tried to meet such demands although this often meant paying more than for comparable German goods.

Diplomats reported correctly that interventions in the public sector worked due to the Finns’ willing co-operation. Germany’s efforts to secure rights of usage to a Finnish harbour in the polar sea were rejected. The most efficient contact person for economic interventions was the new and more powerful foreign minister to whose the Germans ironically had helped by bringing his predecessor down. Public spending was, however, too small a factor to revert the general trend in favour of German industry. A high frequency of mutual visits by traders and industrialists was a sign of willingness to widen economic relations. They resulted in declarations of good-will but were sometimes overshadowed by protectionist grumbling of English traders.

Given a protectionist penchant in the Foreign Office and the difficulty of directing trade by mere declarations of good will the legation did a superb job in preventing conflict. The legation gave its reports a positive spin, alerted their superiors to the sensibilities of Finnish partners and sometimes meditated carefully between British and Finnish parties. A last high-level political visit of a Finnish cabinet minister in Finland passed smoothly in contrast to his visit in Sweden.

By virtue of foreign minister Erkko, liked both with the German and the British ministers, Finland was well positioned to avoid being caught in the differences between Germany and the western powers. This ability to stay neutral was put on test in 1939 when Germany offered a non-aggression pact to serve its propaganda aims at a time when no country wanted to be closely associated with her, least of all neutrality-minded Finland. The Finns put Scandinavian unity over adherence to Germany’s wishes by declining the offer. The legation could not avoid dissatisfaction at home.

At the same time Finnish-British political relations began to suffer from talks on guaranteeing Finland in alliance with the Soviet Union. Finland’s vehement opposition was a far more serious concern to the British than the symbolic German pact offer. In analogy to the pattern in dealing with economic relations it was the legation that defended Finnish interests whereas the London Foreign Office argued in favour of the Soviet alliance.

Before the German minister could rejoice in the discontent the British created by negotiating with Moscow his own country signed Finland away in the Hitler-Stalin Pact without even informing him. From now on the threat of entanglement in a war forced Finland to heed German demands scrupulously.

A purely political analysis is insufficient and economic relations are essential for a comprehensive and proper history of the big powers policy towards Finland in the time between the wars. On the purely political plane German influence grew relentlessly although orientation towards Germany was not desired by the Finnish government. The stronger Germany grew the more its demands for absolute political neutrality had to be heeded. On the other hand, a look at Finnish-British economic relations reveals a squarely pro-British orientation. Germany by contrast was denied access to the Finnish polar sea port of Petsamo. For the UK with its vast trade deficit increased exports to Finland were of paramount importance. Especially the reshaped Finnish government with Erkko as foreign minister directed public expenditure in favour of English industry wherever possible. Even Finnish conservatives who appreciated the value of retaining close ties with Germany were not opposed to expand Finnish-British relations. A comprehensive look at economics, politics and culture makes German pressure on Finland appear like a futile effort to prevent an outdated state of international relations by intimidation and control.