The Socioeconomic Trends in Tobacco Use Among Finnish Adolescents 1977- 2005 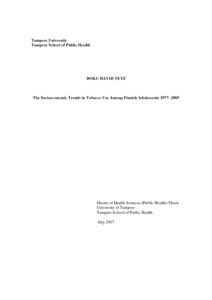 Tobacco use has been identified as the most important source of preventable mortality and premature death globally. Although tobacco use among adults has been declining in recent years in many parts of the world, among adolescents it has been generally increasing. This is a cause of worry because numerous studies have shown that most of the adult who are daily tobacco users today begun in their adolescent age. Young smokers are said to be very probable to continue into adulthood due to the addictive nature of tobacco.

On the other hand, the correlation between socioeconomic status and health outcome has been of significant concern in public health in recent years. A survey through the global burden of diseases shows that most of them are related to poverty (social class). Besides, the major burden of death, communicable diseases, maternal mortality and perinatal conditions, nutritional deficiency and cardiovascular diseases can all be linked to socioeconomic status.

The data for this study was collected as part of a national monitoring system on adolescent health behaviour (the Adolescent Health and Lifestyle Survey). It consists of a 12 page self-administered questionnaire mailed biennially since 1977 to a nationally represented sample of ages 12,14,16 and 18 with two re-inquiries to non-respondents. The Finnish Population Registry was the source of the sample. The samples were selected so that the average ages of respondents were 12.6,14.6,16.6 and 18.6. The data were collected during February to April of each study year. The data collection methods, timing of the survey, size of the questionnaire questions were maintained as similar as possible to enhance the comparability of the results.

Family structure, father’s/ guardian’s occupation, father’s/ guardian’s education, mother’s education, adolescent’s school performance and school career were used in assessing the socioeconomic status of adolescents whiles tried smoking, tried snuff, daily smoking and snuff use were the measures of tobacco use. Simple line graphs, percentages, cross-tabulation, and binary logistic regression were used to analyse the differences in the trends of tobacco. The regression was done separately for each of the socioeconomic indicators and both age- and gender-adjusted and unadjusted odd ratios are presented. The regression models were tested using Chi-square test with p